There are a lot of people out there who are curious how much a Doberman weighs, and some who just want to know if their dog is overweight or underweight compared to the average Doberman. You may have even seen extra large, or “Goliath” Dobermans offered for sale before. Certainly, the breed can vary significantly in size, but only a specific weight range is considered to be the “breed standard” by the American Kennel Club (AKC). Any bigger or smaller, and the dog isn’t not considered a standard Doberman.

The important thing to remember is that these breed standards aren’t necessarily a reflection of reality. What I mean is that these kennel clubs have a set standard of what the ideal weight for the dog is to compete in their shows and get certification papers. This number doesn’t always reflect the real world weight of these dogs, however.

As an example, the European Dobermann almost always outweighs its American counterpart in the real world, but you wouldn’t know that from the official numbers. That’s because the AKC allows for more variation in the weight of their American Doberman Pinschers while the FCI has a much stricter (and tighter) allowed weight range for their Dobermann. So don’t let the range of accepted weights by the kennel clubs confuse you with how much these dogs normally weigh. Below I’ll tell you what you can expect in the real world.

This growth chart shows the approximate growth rate (measured in pounds) of a Doberman Pinscher. The chart is based on the AKC’s Doberman Breed Standard. As you can see from the chart above, the Doberman’s growth is pretty significant during the first year of its life. After one year, the Doberman is considered to be an adult and at their full height, although weight gain continues, although at a slower rate, for about the next year as the dog’s frame fills out.

Use this chart as a general guideline of what to expect as you Doberman grows. It should only be considered to be a rough estimate however as the weight of Doberman’s varies greatly. If your dog falls outside of the shaded region of this chart at any given stage of growth it doesn’t necessarily mean they’re unhealthy. Of course, if you have any concerns about your dog’s weight, it’s best to consult with a qualified veterinarian.

Rule of Thumb: The average growth rate of a Doberman puppy is roughly 10 pounds of weight gain for every month of age.

One general rule that Doberman owners use to remember the growth rate of the average Doberman is “ten pounds every month.” That means they should weigh 20 pounds at two months of age, 30 pounds at three months of age, 40 pounds at four months, and so on. This rule is generally fairly accurate for male Dobermans until about seven or eight months of age. At that point, the Doberman’s weight gain rate begins leveling off.

For female Dobermans, you can use the same rule if you subtract about 5 pounds from that weight. So you can generally expect a female Doberman to be about 15 pounds at two months of age, 25 pounds at three months, 35 pounds at four months, and so on. Again, please remember that this is a general “rule of thumb” and is certainly not a perfect calculation.

While the above chart will show you the approximate range in weight a Doberman is likely to be at any given age, the table below will show you what the average weight (or “mean” weight) is at any given age. Your dog might be above or below this, and that’s fine, these are just averages so you can gain a better understanding of their growth pattern.

This table should be considered as only a guideline. Every dog is different and Dobermans are known to have a wide variation in their weight.

When getting a new Doberman puppy, the best advice I can give you is to talk to your breeder. They should have an idea of the family history and how your pup’s parents developed over time and can provide you with a better idea of what to expect from your specific puppy.

While some dogs will reach a stable weight closer to 18 months of age, at two years of age the Doberman is generally considered to be full grown. The height and weight of the dog are typically stable at this point, and their joints are fully formed. Usually, there is very little (or no) filling out of the dog’s frame left to do. At that point, their bodies are ready to handle more strenuous types of activity.

Sometimes there will still be minimal growth in a Doberman after the age of two years in terms of weight, but the height of the dog should be basically stable. Although the Doberman is still not considered to be “in their prime” until about three years of age.

The AKC lists the following weights as the “breed standard” for the American Doberman Pinscher.

It’s nice to see that the AKC’s breed standard attempts to account for the broad range of weights for the Doberman Pinscher. This is why I decided to model the above growth chart off of their estimates. However, it’s worth noting that it’s certainly still possible to have a healthy Doberman who falls outside of the above-mentioned weight range.

The European Doberman (also called “Dobermann”) has a body type that’s a bit bulkier and more muscular than the American variant. Their bone structure is also a little thicker. This is most apparent in the blockier head and snout, as well as their broad chest. This means they generally weigh more. The growth chart shown above was modeled around American Dobermans but can be used to estimate the weight of a European Doberman as well.

A European Doberman’s weight will usually fall near the top edge of the growth chart’s shaded region. The final adult weight of a European Doberman will more typically be near to the 100-pound mark.

The Federation Cynologique Internationale (FCI) defines the following as the breed standard weights for the European Doberman.

The European Doberman has an equally broad range in adult weights within the breed as the American Doberman, it appears though that the FCI just has stricter requirements for their breed standard than the AKC does.

For more information about how European and American Dobermans are different (including detailed diagrams of both dogs), see my article American vs. European Doberman: A Side-by-Side Comparison.

Is Your Doberman Overweight or Underweight?

The best way to determine if your Doberman is overweight or underweight is by a visual inspection. The reason you can’t rely on numbers and graphs for this is simply that, just like in humans, every dog’s body is different.

Some have smaller frames while others have larger ones, and a Doberman whose used to more strenuous activity and possesses more muscle mass, as a result, will weigh more than one who doesn’t. This doesn’t mean that either dog is necessarily unhealthy, however.

When your dog is at an ideal weight, it’s a great indicator that they are happy and healthy. They are fit and ready for activity. Some signs that your Doberman’s weight is within the ideal range are:

Just like with humans, there are various health concerns if your dog is overweight such as joint issues and increased susceptibility to life-threatening diseases. Being overweight also increases the chances of injury during strenuous activity. Your dog may become lethargic and their emotional well-being may suffer as a result. Here are some typical traits of an overweight Doberman:

NOTE: Make sure you’re always feeding your Doberman a quality food that is NOT grain-free since recent research suggests grain-free diets are linked to heart issues in the Doberman breed. You can see the current list of my recommended best foods and treats for Dobermans here.

It’s always good to make sure your dog is growing correctly and on track to be a healthy weight as an adult. Don’t ignore any sudden changes in your dog’s weight, as it could be an indicator of an underlying health concern

This is why I strongly urge Doberman owners to always DNA health check their Dobermans so they know what genetic issues they might be up against. Don’t just watch the years tick by wonder what might be in store for your Dobie. I wrote this DNA testing guide specifically for Doberman owners to help you out with that.

The most important thing I can stress in this article is that every Doberman really is different. The weights I have provided here should really only be used as rough estimates. The best way to see if your dog is truly at a healthy weight is to consult with a qualified veterinarian. I wish you and your Dobie a long healthy life together!

At what age is a Doberman full grown? At 1 year of age, a Doberman has reached its maximum height and is considered to be an adult, although they will continue to gain weight until about 2 years of age.

At what age has a Doberman reached their full height? A Doberman will reach their maximum height at about 1 year of age (12 months). 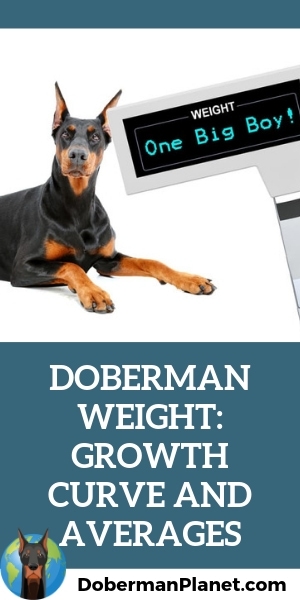