One of the biggest concerns I hear from new Doberman owners is that they are worried the breed has an extremely short lifespan. There are many rumors surrounding this topic so I decided to do some legwork and collect as much information on the actual lifespan of the Doberman as possible.

I’ve read the same average life expectancy numbers as every else has. But what do actual Doberman owners say? Not just veterinarians, dog breed books, or online encyclopedias, but people who’ve actually owned these magnificent dogs? I decided to find out.

It’s not that I don’t trust the official life expectancy numbers, it’s just that I am more of a hands-on type and I wanted to conduct this research myself. I want real-world numbers. So this is my own, un-official study to see what the average lifespan of a Doberman Pinscher is. Would the lifespan I discover as actually reported from owners of Dobermans be more or less than the “official” number of 10-13 years? Here’s what I did to find out.

I spent hours scouring all the forums, facebook groups, and other meeting places for Doberman owners who had posted messages of their Doberman’s passing away to see what they reported as their age at death. Yes, it was a bit depressing at times, but quite interesting too!

I took into account male, female, and unknown sex dogs. A dog might have an “unknown” sex listed below because although the owner reported what age their dog died at, they didn’t indicate the sex.

I collected data on 59 Doberman Pinschers in my sample and this is what I found.

Now, remember that these numbers were pulled from forums, facebook groups, and other social media platforms. It’s worth mentioning that there is something fascinating that happens when someone posts a question like “how old was your Doberman when they died?” on social media.

People love to respond to these types of polls when they either want sympathy or want to brag. Think of your ex who is always posting about how magnificent his or her life is. Is their life really that amazing, or is just that human desire to brag coming out? That’s what I believe happened with this survey.

The average age of almost 9 years old is significantly lower than many would imagine for a Doberman to live likely because many people were looking for sympathy for the passing of their dog. Frankly, this is natural and understandable.

I’m not saying anyone was lying with what they posted, I’m simply saying that those who had their Doberman for the length of time they expected, didn’t feel the need to respond or post about it. Those who lost their dogs “too early” needed an outlet. That’s why I believe these numbers are slightly skewed.

I did find a poll that Dobermantalk.com did with their members asking them to vote on how long their Doberman’s lived. You can see the poll here. The sex of the dogs wasn’t specified in this poll. Here are some takeaways from the polling:

Note: The oldest and youngest age categories on this poll were disregarded while calculating the averages.

Now with a poll such as this, there is a different psychology at play. The people who vote in it can’t type out a long description of what happened to their dog, they can only click an age to vote.

What happens in this type of voting is the natural desire to “win” or be at the top of the list (think of your ex on Facebook again—their life is just so great). Therefore, you often have people whose dogs died at an older age responding more often and those who’s dogs died younger, or at the expected age, not responding at all.

Although this survey isn’t perfect, it’s as close as we can get to some real-world examples of the Doberman’s life expectancy. The official lifespan of a Doberman is generally considered to be between 10 to 13 years of age. Given that this is almost exactly between the two results I got from scouring social media and the user poll, I’d say this is an accurate number.

Predicting Longevity with the Coefficient of Inbreeding (COI)

There have been some really exciting developments in the world of dog DNA testing that might be able to help you get some insight into your Doberman’s potential longevity.

Probably the most exciting thing is called the “coefficient of inbreeding” (or COI) test. This is something that certain DNA health test kits not include which can give you a number of how inbred your dog is. All Dobermans are inbred to some extent, but some are worse than others. The more inbred your dog is, statistically the shorter their lifespan.

I urge every Doberman owner to health test their dogs. Modern test kits will give you such an in-depth view of your dog’s genetic health disorders and other health-affecting factors that it’s simply incredible.

I go into much more detail about what this COI number is, how to test for it yourself, and what it actually means in my guide Doberman DNA Health Testing: The Complete Guide.

Why Doberman’s Have a Short Life Span

Short is a relative phrase but I am going to use it here because if you speak to any owner of these magnificent dogs who’s lost them, they’ll tell you that their life just wasn’t long enough. There are a few reasons why Dobermans seem to die earlier than many other breeds.

First, they are an impressively large breed of dog. It is well known that the larger a breed is, the generally shorter lifespan they have. As an example, the Great Dane has a lifespan of between 8 to 10 years while the Shih Tzu has a lifespan of 10 to 16 years. That’s a big difference. They are also drastically different in size.

In addition to their size, Dobermans are also prone to some specific diseases. These are some of the common disorders in Doberman Pinschers.

The most important thing to do is have regular checkups and get your dog (or your dog’s parents, since it’s genetic) tested for Von Willebrand Disease. It’s a nasty disorder that can be detected in many different ways. The earlier you detect these health issues the better chances you’ll have at being able to mitigate the disorder so your dog can live a long and happy life.

“In general, the larger the dog, the shorter the lifespan. Dobermans are prone to some problems such as bloat and Von Willebrands’s disease, however, their size is a big factor on the length of their life.”

How to Help Your Doberman Live a Longer Life

There are definitely things that an owner can do to help their Dobie live longer. Some of these are common-sense steps that any responsible dog owner should do to keep their dog healthy but there is at least one surprising study I found about something that can be done to (possibly) extend their life up to 30%, at least in females.

Common sense steps that any dog owner can do to extend the lifespan of their dog is to provide them with a quality diet, plenty of exercise, regular checkups, and good oral hygiene. Skip that cheap Walmart brand dog food and go for something a bit higher quality with more protein. Blue Buffalo and Royal Canine (large dog formula) are two examples of quality dog foods.

Making sure your dog gets plenty of exercise is even more important for Doberman’s since they’re considered a working breed. This will not only help them stay physically healthy but mentally healthy too. Doberman’s are incredibly intelligent dogs that are easily bored.

There are plenty of studies that show how a quality diet and plenty of exercise extends the life of a dog so I won’t go into that here. However, I did find one exciting study that suggested that female dogs who aren’t spayed until after the age of six lived about 30% longer (their average lifespan increased from 9 years to 13 years). This study was conducted on Rottweilers and not Dobermans, but it is worth mentioning. You can find more information about this study here.

There are rumors of a “documented” case of a Doberman Pinscher in Berlin, Germany living to the ripe old age of 22 years old. Even though this case is supposedly documented, I wasn’t able to find any information to back it up. I was able to locate multiple Doberman owners who said their dogs made it to 14 years of age, and the oldest I found was 16 years of age.

Are Dobermans prone to cancer? Doberman Pinschers are considered to be among the top 5 breeds most prone to developing cancer in their lifetime. This usually occurs in the form of prostate cancer in Dobermans. If caught early, there are often treatment options available that can significantly extend life.

Are Dobermans prone to heart problems? Doberman Pinschers have a genetic predisposition for developing heart disease. A genetic mutation present in the Doberman breed makes them susceptible to developing Dilated cardiomyopathy (DCM) which causes an enlarged heart, erratic heartbeats, and weakness of the heart muscle.

41 thoughts on “What’s the Actual Lifespan of a Doberman Pinscher?”

DobermanPlanet.com is a participant in the Amazon Services LLC Associates Program, an affiliate advertising program designed to provide a means for sites to earn advertising fees by advertising and linking to Amazon.com.  We also participate in affiliate programs for ShareASale and other sites. Doberman Planet is compensated for referring traffic and business to these companies. 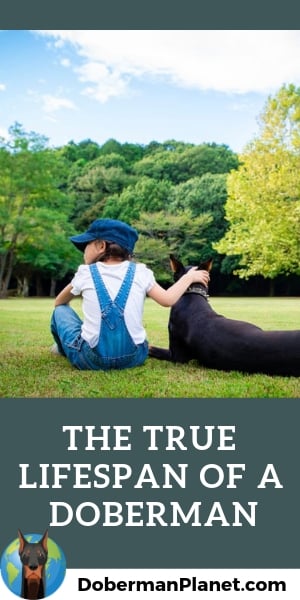