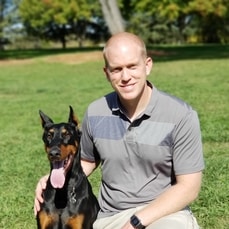 My name is John Walter and I’m the founder of DobermanPlanet.com. I fell in love with Doberman Pinschers long before I ever owned one. I loved how elegant, strong, and alert they are. Then when I learned how intelligent they were, I found myself even more excited about the idea of owning one someday.

In December of 2012, my soon to be wife and I moved into our first home together, and this one had a backyard suitable for a Doberman. So in February of 2013, we found a Doberman breeder in the Sacramento area of California who had a new litter of puppies. Both parents of this litter were certified purebred European Dobermans. We were the first to see the litter, so we were able to have the pick of the litter! Each puppy in the litter was wearing a different colored collar.

Soon after arriving, my wife pointed to one puppy with a red collar that would always break out from the pack of his brothers and sisters and come to us when we called out to the group. The red-collared Doberman pup seemed to be incredibly focused on us and time after time, he would be the first to come when we called out for the puppies. My wife knew she wanted that red collared puppy right away.

I was a little more methodical and insisted on running each puppy through a series of “puppy tests” to see what their individual personalities were like. I scored each pup on a series of tests, added up their scores, and guess which one scored the highest? The puppy with the red collar!

We brought home our new Doberman “Cooper” in February of 2013. Since that time, I’ve been enamored with this amazing breed. As a writer, trainer, and avid researcher, I’ve made it my mission to learn as much as possible about the breed, network with other Doberman owners, and spread knowledge about how wonderful these dogs are.

After struggling through the tough puppy stages, my wife and I found ourselves continually growing closer to Cooper as the years

went on. He even had a featured spot in our wedding! We now have our first child and Cooper is full grown and weighs in at about 90 pounds. I’m amazed every day with what an amazing family dog a Doberman can make. Cooper is incredibly gentle with our baby boy, loves being with us at all times, and is very in tune with what we expect of him. We never have to worry about him running off when we take him out somewhere off-leash.

I’ve found Dobermans to be gentle, kind, great protectors, and highly intelligent. They don’t shed much, are easy to take care of, and they just want to be with their family as much as possible. That’s why many people refer to Doberman’s as “Velcro Dogs.” They are always stuck to your side!

I was really excited to get a loyal protector for my family, especially on nights where I had to work late. Knowing that Cooper was at home with my wife was a big relief. But one thing I didn’t expect, was how great our Doberman would be on the outdoor adventures we take!

We’ve been on multiple over-night backpacking trips with Cooper and every time we’ve been so happy to have him. Not only does he do a fantastic job hauling his own gear with him in his pack, but we never need to have him on a leash, he won’t wander off, and he insists on laying in watch over us while we sleep. Which, when you are out in the woods by yourself, is a really great feeling.

This is what kicked off my love, and passion, for the Doberman breed and it’s why this is the only breed I now work with.

The areas where I have gained valuable training, knowledge, and expertise is specifically in family relations involving Dobermans.

My dogs are not IPO/Schutzhund competitors and do not compete in bite sports. While I believe that these things are great hobbies for some, this is not what a majority of owners are looking for in a Doberman.

Most owners simply want an easy to manage, loyal, loving, protective, and gentle family companion who is completely trustworthy in their home environment. This is where my expertise lies. What I enjoy doing more than anything, what gets me up in the morning, is helping people with their Doberman to thrive in a family environment. So, I strive every single day to be the best “Family Doberman Specialist” that I can possibly be.

My qualifications as a Family Doberman Specialist:

The great thing about all of this is that it’s what I enjoy doing, and now I own and operate DobermanPlanet.com where I get to share all that I’ve learned about these amazing dogs over the years. I use my website or my YouTube channel to report back to Doberman owners worldwide on what I’ve learned through the years and with my on-going research. I truly love helping other Doberman owners bring these wonderful dogs into their family or their specific living situation.

It’s up to Doberman owners all over the world to spread the word about this wonderful breed! Let’s bring this breed into the mainstream and let the world know what a wonderful family addition a Doberman Pinscher makes!

Experts Who Have Collaborated with Doberman Planet

Here at Doberman Planet, we often reach out to experts in certain fields to provide their valuable insight. Below are some of the experts we’ve collaborated with in the past to ensure that this site contains only the most accurate information possible.

The best way to contact me is to leave a comment on an article on this site that most closely addresses the topic of your question. I also frequently respond to viewer’s comments on my YouTube channel.

Information regarding advertising and media related inquires can be found on this site’s contact page.

Thank you for visiting DobermanPlanet.com!