I always knew that Dobermans were strong, powerful dogs but when I first got interested in getting one, I often found myself wondering how strong their bite actually was and how it compared to other dog breeds. I did countless hours of research on this, and the answer was rather surprising.

There is actually a lot that goes into the force of a dog’s bite. Factors such as health, size of their body, size and shape of their skull, and physical conditioning can make a big difference. That’s why you will often see conflicting reports from various sources on the force of a Doberman’s bite. One source even claims a 600 PSI bite force. But is this really possible?

Bite pressure is generally measured in PSI or “Pounds per Square Inch.” This refers to how many pounds of pressure are applied per square inch. So if the force is 150 PSI, that’s the same pressure as a 150-pound person standing on just one square inch of your hand. Painful right?

When researching the force of a Doberman’s bite, I discovered that the most commonly measured bite force numbers are: 245 PSI, 300 PSI, 305 PSI, and 600 PSI. In fact, the rating of 305 PSI has been reported multiple times by many different reputable outlets.

When looking at these numbers it is clear that the 600 PSI rating seems far off from all other ratings that exist online. But why? Many claim this is a rumored number that has never been substantiated and true to those claims, I was not able to find any first-hand accounts of a Doberman actually being measured as producing that amount of force.

In fact, many good arguments exist as to why this number is merely a myth and should not be considered accurate. They include:

Although a dog’s breed does play a significant roll in determining how strong of a bite the dog is capable of, there are many other factors that can play an equally large role.

There are two variants of the Doberman, the European and the American. Evidence suggests that the European may have the stronger bite. To learn the differences between these two, see my article American vs. European Doberman: A Side-by-Side Comparison.

Other Factors that Determine a Dog’s Bite Strength:

Since there are many variables affecting how strong a dog’s bite is, any numbers representing the force of a Doberman’s bite (or any dog’s bite) should really only be considered an approximation.

Even though rumors of a 600 PSI (pounds per square inch) bite force in Doberman’s may not be entirely accurate, they are still incredibly impressive and strong dogs. In fact, their scissor-like jaw action, which can inflict multiple bites in very rapid succession, makes their bite one of the most dangerous in the world.

The bite force of 305 PSI is also significant enough to put the Doberman Pinscher in the top 5 dog breeds with the strongest bite force. There are even reports of a Doberman breaking a grown man’s forearm with a single bite.

Video: The Insane Bite Force of the Doberman Pinscher

There are various types of bites that dogs have which generally refer to the way in which the jaw closes. In the case of the Doberman, the jaw closes in such a manner where the teeth slide into place very close to other teeth in the jaw. This makes for a fairly effective slicing action when biting.

Also, the Doberman is much more likely to strike by releasing and re-biting its target in very rapid succession. These multiple quick bites can cause a lot of damage in a short time. This is commonly referred to as a “scissor bite.”

How the Doberman’s Bite Compares to Other Dogs Breeds

The Doberman’s bite is one of the strongest in the K9 world. Here is a list of other popular dog breeds along with their measured bite force so you can get a better idea of how the Doberman stacks up.

Considering this is a list of the absolute most powerful biters in the dog world, the Doberman comes it at an impressive position. The Kangal is the world’s more powerful domestic dog when it comes to their bite, coming in at an astounding 743 PSI of bite force.

How the Doberman’s Bite Compares to Other Animals

While the Doberman’s bite is one of the strongest bites in the dog world, there are plenty of stronger bites out in nature. See the list below to get an idea of how it compares.

Dobermans still have much stronger bites than a human bite and even many other domestic dogs, but there are still much stronger biters in the animal the world. The crocodile comes it at first place with a jaw-dropping 3700 pounds of pressure per square inch.

Doberman Pinschers are known for being one of the most intelligent dogs in the world. They are also extremely loyal and have a natural protective instinct. Due to their protective instincts, they will often sleep in-between their owners and the door to the room their owner is sleeping in. You’ll almost never find a Doberman sleeping with their back to a door. Many Doberman owners also report issues with excessive barking in their Dobermans. These are just a few examples of the many ways a Doberman Pinscher instinctually (with no training whatsoever) will display their aptitude for guard dog duty.

For these reasons, they have traditionally been used as police and military dogs for many years with great success. In recent years, however, some police departments have transitioned away from the Doberman due to the fact that they don’t do well in cold weather and the public perception of the breed as a “vicious breed.”

Do Dobermans Have “Lock Jaw”? No. In fact, no known dog breed has been discovered to have a mechanism or enzyme which causes them to “lock” their jaws. This myth has most often been assigned to the American Pitbull Terrier. Dobermans have a scissor-like jaw action and can deliver multiple bites in rapid succession.

How Dangerous are Dobermans? While in the past Dobermans were bred to promote aggressive personality traits, thanks to selective breeding most modern Doberman’s are gentle dogs that make excellent family dogs. They are one of the world’s most intelligent, loyal, and physically strong breeds.

DobermanPlanet.com is a participant in the Amazon Services LLC Associates Program, an affiliate advertising program designed to provide a means for sites to earn advertising fees by advertising and linking to Amazon.com.  We also participate in affiliate programs for ShareASale and other sites. Doberman Planet is compensated for referring traffic and business to these companies. 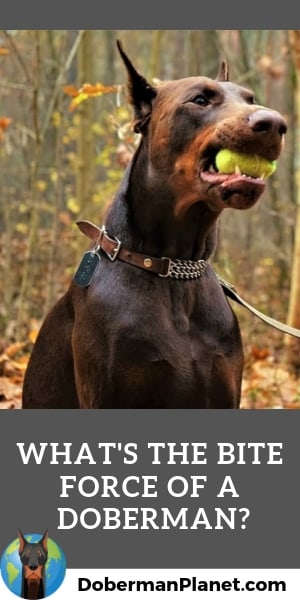