Recently, a friend of mine wanted to get a dog for his family. He told me that he absolutely loved Doberman Pinschers but that his wife would only let him get a dog that could primarily live outside. So I decided to spend the next half a day researching the characteristics of the Doberman to find out if it’s possible for them to be kept as “outside dogs.”

Can Dobermans live outside? Doberman Pinschers cannot live outdoors. They don’t have the mental or physical characteristics necessary to be outside dogs. Their short single layer coats and low body fat means they don’t do well exposed to the elements, especially in cold climates. They also need frequent human interaction.

There is actually a lot to consider when deciding whether any dog can live outdoors. How long your Doberman can be outside and away from normal interactions with the family will depend on a number of factors as well. You just might be in for a surprise if you leave your Doberman alone in your backyard for too long.

Why Dobermans Make Poor Outside Dogs

Many people love the idea of getting a Doberman Pinscher. After all, they’re a proud and elegant breed. They’re also great family dogs, fearless family protectors, and one of the top dog breeds in terms of intelligence. And talk about trainable! You can impress your friends all day long with the tricks your Doberman can learn.

But, if you aren’t prepared to have your dog live inside your home with the family, a Doberman is one of the worst dog breeds you could choose. Here are some of the main reasons why these magnificent dogs are horrible as outside-only dogs.

Although each individual dog will show slight variations, these mental characteristics are typical of the Doberman Pinscher. Let’s face it, we love these dogs because they are such great loyal family dogs and amazing protectors. With those traits comes some of these realities that you should be prepared for.

Doberman’s are dark colored (or black) dogs and seem to absorb heat quickly. They’re also very muscular and seem to have a thirst that will cause them to suck down even the largest water bowl in just a few minutes.

You should avoid the extreme heat with your Doberman. It’s easy for these dogs to get heat stroke if overworked on a particularly hot day. If the temperature outside is anything over about 104 degrees Fahrenheit, you should only let your dog out for short durations. Otherwise, it’s best to keep them indoors.

If it’s an unusually hot day and your dog is outside (especially if they’re being physically active), make sure he has access to cool shaded areas and plenty of water.

As you’ve probably figured out, Doberman’s don’t tolerate the cold very well. In fact, although Doberman’s were used as Police dogs heavily in the United States in the past, in recent years many departments have steered away from Dobermans specifically because of how poorly they do in cold weather.

Doberman’s will shiver quite easily while outdoors and anything below about 55 degrees Fahrenheit will not be tolerated well by your Dobie. Their short fur leaves them very exposed to the elements.

Tossing in the fact that they desire so desperately to be with humans means your Doberman will more than likely prefer to stand, shivering in the freezing rain looking in your sliding glass door waiting to join the family, than be huddled up in his doghouse trying to stay warm.

To know when you should put a coat on your Dobie, see my article Do Dobermans Need to Wear Coats in the Winter?

What Happens if a Doberman is Left Alone Outside

If you leave your Doberman Pinscher outside for an extended period of time it isn’t terribly uncommon for them to lash out in many destructive ways. They will quickly get frustrated and likely suffer separation anxiety since they have the natural instinct to be very close to their masters.

The following are some common behaviors of a Doberman left alone for significant periods of time:

Often when a Doberman is left outdoors all day he will bark like crazy and you’ll find yourself scrambling to find ways to stop the barking. You might even get a little love note from your neighbors when you get home from work about the noise. Your dog might also do some other unpleasant things in your backyard out of frustration such as digging holes in your yard, eating plants (even potentially poisonous ones), and having a field day with your irrigation system.

If left alone for long periods of time your Dobie can also start to develop aggression issues. Historically, outside dogs tend to show more aggression towards humans than their inside-only counterparts. For a large, powerful breed like the Doberman, issues with aggression can be a serious problem.

Many people believe that as long as they provide their Dobie with nothing but the best of accommodations outdoors, that they can then be outside dogs. Unfortunately, the truth is, even if you provide them with the taj mahal of dog houses with built-in heaters, fans, and water dispensers, they still won’t fare well.

Providing a plush dog house doesn’t address the large mental related issues that surround leaving your Doberman outside at night or for many hours during the day. It’s also very likely it won’t be used as often as you think anyway since they will be seeking out other humans as much as possible the entire time, even to their own detriment in freezing temperatures.

Doberman’s clearly are not cut out to be outdoor dogs. They aren’t built for it physically and are happiest when they’re apart of the family. Frankly, they will also be a better protector when they are bonded with the family, which is one of the biggest benefits of owning a Doberman.

Now that I have owned my Dobie for about 5 years and have talked with many other Doberman owners, I know that I ‘m not alone with some of the strange behaviors I have seen from my dog. Now I know they are mostly related to my dog’s genetics and an overall aversion to poor weather.

I remember seeing my Doberman go out into the backyard to pee, and lift his feet unusually high when it was raining. If the grass was wet one day after the sprinklers went off, I’d see him quickly run out into the grass, pee, and run back onto the concrete as quickly as possible with those same high-prancing steps. As funny as it was to watch, the reason he did this was he hated getting wet and cold. Not something you’d expect from a dog.

I used to think there was something wrong with my dog but from my research, speaking to other Doberman owners, and just getting to know my dog better I learned it’s really just the cold hard truth when it comes to Doberman’s: they hate being out in the elements and should only be kept as primarily indoor dogs.

Can Dobermans be in the cold? With short fur and a single layer coat, Doberman Pinschers are not built well for cold climates. Exposure to temperatures below 55 degrees Fahrenheit (or about 13 degrees Celsius) should be limited.

What temperature is too cold for a Doberman? Generally, anything below 55 degrees Fahrenheit (or about 13 degrees Celsius) is not well tolerated by the Doberman Pinscher. The Doberman doesn’t do well in cold weather.

5 thoughts on “Can Dobermans Live Outside?” 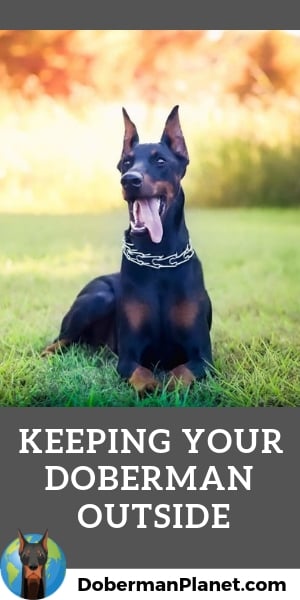