I always knew Doberman’s were fast on their feet, but it wasn’t until I owned one that I was able to see it for myself. I’ve seen my dog run impressively fast without really trying. So it made me wonder how fast a Doberman Pinscher is really capable of running.

Many owners of Dobermans are like me; they know their dog is incredibly fast, but they don’t know just how fast. Luckily, we have the AKC’s FastCAT dog speed competitions to help us figure out how fast a Doberman can be.

Also, more than a few curious-minded folks have gotten out the stopwatch, got in their car, or even attached a GPS to their Doberman so we could have the answer to this question. But exactly how fast any one specific Doberman is depends on a few, very important factors.

Determining the Speed of the Doberman Pinscher

While on my quest to find out exactly how fast my Doberman is, I questioned how I was going to figure out the number. After all, the average Doberman will easily outrun even an avid runner on their morning jog. They’ll even have no problem keeping up with your energetic teenager when they take them for a run alongside their bicycle. So how do we know just how fast they are?

Well, I soon found that there were two sources for this information. First was the “authority” sources from dog breeders, people in the dog racing world, magazines, and other such sources. The other source is from people who have actually done the legwork themselves and clocked their Doberman. I truly believe that both sources are just as valuable. So here’s what I discovered:

Authority sources on the subject often say Dobermans can reach speeds between 30 and 40 miles per hour (MPH). However, they mention that “most” Dobermans in average shape can run between 25-30 mph.

There have been many who contest these numbers on both sides. That’s why I decided to contact the owner of one of America’s fastest Dobermans to find an answer.

Teddy Runyon is the Owner of a Doberman named Thor. Thor’s official AKC registered name is “Thor Exceptional Mastercopy CA DCAT”. For a short time, Thor was the fastest Doberman in the United States, however, he currently sits in the number two position on the AKC Fast Cat Top 20 Fastest Dogs page.

Fast CAT is a speed competition regulated by the American Kennel Club and open to any dogs who are registered with the AKC. The dog’s speeds are carefully measured and judged to ensure the results are as accurate as possible.

Thor’s fastest speeds while competing were measured as follows:

These numbers are likely to be the most accurate information we have for the top speed of the Doberman Pinscher. That is why this website will maintain that the top speed a Doberman is capable of reaching is roughly 35 mph.

However, these speed competitions are done on grass and not everyone who owns a Doberman enters them into these competitions (or even know that they exist).

Are there faster Dobermans out there? Can a Doberman reach higher speeds on a different type of terrain? Due to these, and so many other questions, many owners have taken to speed-clocking their Dobermans themselves, and the results are very interesting.

Owners Who Have Speed-Clocked Their Dobermans

Luckily, I was able to find multiple owners who had actually clocked (or did at my request) their Doberman Pinscher at a full sprint.

Here are the results of the Doberman Pinscher speed tests using 6 different dogs:

Since in this article we are most concerned with what the maximum speed is that a Doberman can run, it is safe to say the maximum is approximately 35 mph (confirmed by race results) or 40 mph (unconfirmed).  Of course, this depends on the conditioning, age, and health of the individual dog.

See this video on YouTube as an example of a Dobie owner clocking his dog at 32 mph with his vehicle.

Other Factors Affecting the Speed of a Dog

Obviously, a lot more goes into how fast a dog is other than just the breed of the dog. In the human world, you have athletic people who run all the time and are extremely fast, and you also have couch potatoes who never go for a run and probably couldn’t catch a cold. Well, it’s the same in the dog world.

If your Doberman is physically lean and very accustomed to physical activity, it’s going to help them when it comes to running. If you take your dog with you for a daily jog, it’s not only going to help their muscles develop for running but their lungs and heart as well.

This the main reason there are often discrepancies with how fast a certain breed of dog is. One owner might clock their Doberman Pinscher at 28 mph while another might clock their’s at 40 mph. The difference is conditioning. If you want your dog to be fast, keep them lean, healthy, and make sure they get plenty of exercise.

Besides physical conditioning, other major factors affecting the top speed of a dog are: the terrain the dog is running on, the condition of their paws, and the level of effort exerted by the dog on any given sprint.

How Dobermans Compare to Other Popular Dog Breeds

The average dog can sprint at speeds ranging between 15 and 20 mph. At 35 miles per hour, the Doberman is considered to be extremely fast. This is even more apparent when we compare the Doberman’s speed to other popular large dog breeds. Here’s how the speed of the Doberman Pinscher stacks up:

Can You Outrun a Doberman Pinscher?

The fastest human in the world is Usain Bolt, an Olympic Athlete that currently holds the 100-meter and 200-meter world records. In 2009, Usain Bolt set the world land speed record for humans at 27.8 mph. Although he’s impressively fast in the human world, when compared to a Doberman, Mr. Bolt doesn’t stand a chance.

So on speed alone, you won’t be able to outrun a Doberman Pinscher. Even if you are exceptionally fast and the Doberman chasing you is in very poor physical shape.

Your best bet to get away from a Doberman, if you ever were unfortunate enough to have one chasing you, is to put obstacles between you and the dog. This means you should jump in a car, go into a house, climb a tree, or climb a fence. The one large physical advantage that humans have over a dog is the ability to traverse large obstacles. We’re descendants of monkey’s after all! So if you ever find yourself in this position, use your physical nature to your advantage and climb.

Luckily, Dobermans are not aggressive dogs by nature. Many generations of breeding for companionship more than aggression has created a more docile dog that perfect for family life, but still retains protective instincts (and abilities).

How to Condition Your Doberman for Running

There are many things you can do to help your Doberman to be faster. In fact, all of these things are not only great for building speed but are also great for improving the overall health of your dog. Physical activity will strengthen your dog’s heart, lungs, muscles and will likely even make your dog happier. The Doberman is considered a working breed and loves to be active.

Here are a few things you can do with your Doberman to not only help improve their speed but their overall health as well.

Using these methods you should be able to drastically increase the speed of your dog. Consistency here is key. Try to get in the habit of doing something daily with your dog to improve their health and physical conditioning.

A word of warning; make sure that you start slow. This is especially true if your dog is new to physical activity and has made it a bad habit of being a couch potato in the past. Always remember to utilize positive reinforcement, provide plenty of water, and know how to watch for signs of exhaustion.

Always seeks a veterinarian’s assistance should you notice anything unusual at any time. In fact, if you plan to start an intensive training schedule with your dog, it might be a good idea to see a qualified veterinarian anyway to discuss your plans.

How far can a Doberman Pinscher run? Many Doberman owners report regularly running their dog for over 10 miles at a time without the dog displaying any signs of exhaustion. The distance a Doberman can run is dependent upon factors such as the individual conditioning and the pace the dog maintains during the run.

When can you start taking your Doberman Pinscher for runs? It is safest to limit extended runs with your Doberman until he or she is at least 18 months of age. Long distance running earlier than that, especially on concrete, risks damage to the dog’s joints which are still developing.

8 thoughts on “How Fast Can a Doberman Run? 6 Speed Clocked Dobermans” 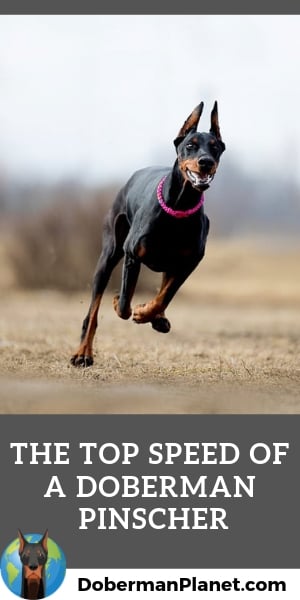